You are here: Home / Games / Poker 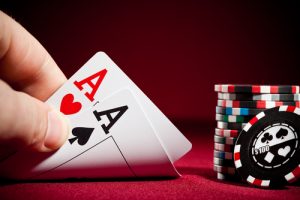 Online poker is seen as many as the father of the entire online casino industry. Online poker rooms like Full Tilt and Party Poker brought in a new generation of poker players and made super stars of many of the world’s best card players. Our guide teaches readers profitable Texas Hold’em strategy and tips which aids in understanding the theory behind winning poker, no matter your level or playing style.

You hear people say that poker is a game of chance and Lady Luck determines who wins and loses, and they’re not wrong. Luck does play its part in poker games. Many long-time poker players can be heard saying “I’d rather have luck than be good”.

Texas Hold’em is a card game. It uses a normal 52-card deck, and the same goes for when playing online. It’s a game which needs both skill and luck.

If you would like to master at least one card game, then Texas No-limit Hold’em is the game for you. When it comes to poker games, it is one of the simplest games to play but the most difficult to become skilled at. This game has a distinctive combination of random chance, psychology, strategy and mathematical ciphering practically unrivalled by any other card game. There are tones of other awesome poker games but when it comes to simplicity and plain popularity, No-Limit Hold’em is sovereign.

No-Limit Hold’em, which is more commonly recognized as “Texas Hold’em,” is a game of poker where participants receive two cards. In conjunction with a shared community group of cards, each player then uses their two cards (or just one of the cards in certain scenarios) in order to make their best-five card poker hand.

The magnetism of no-limit poker is that there are four rounds of betting and players are able to insert all their chips in the middle whenever they want to. The thrill of being just one hand away from doubling or tripling your stack is exhilarating yet on the flip side, you’re just one hand away from completely busting out, makes this game so exciting.

The first factor that you need to take heed of and understand is your basic poker rankings.

A large percentage of beginners make the mistake of thinking that they carry a winning hand. Have a look at the simple hand ranking below.

Straight beats flush? Wrong! A flush beats a straight. A flush is any five cards of the same suit i.e. all spades or diamonds.

Two-pair beats three-of-a-kin? Nope, in poker it is better you have three aces instead of two aces and two kings.

The strength of your card does not matter. It does; an ace-high flush beats a king-high flush.

This is how a basic game works.

Everyone at the table gets dealt two cards from the dealer, starting from the player on the left and ending with himself.

The player to the left of the dealer acts first and they will have a choice of:

Thereafter, the dealer places three cards on the board face-up. These are known as community cards that anybody is able to use. This is known as the flop.

Afterwards, everybody still in the hand takes a turn to bet and accordingly raise or fold. The dealer then adds a fourth card to the table that any player can utilize. This is known as the turn. Everyone gets another chance to bet, check, raise or fold again. The dealer then places a fifth card on the board that any player can once again use. This is known as the river. Everybody who is still in the game, gets a chance to check, bet, raise or fold for a final time.

A term you may have heard before is the big blind or small blind. It isn’t as complex as you may believe.

The two players to the left of the dealer have to place small bets into the pot. It is compulsory to put the bets down devoid of seeing your cards which means that you are “blind”.

To make it less complicated, you may think of them as a bet. No-Limit Hold’em showcases blinds to intensify the action in normally boring hands. If not, players can fold every hand with no repercussions which is a problem.

Bluffing – how does that work?

Bluffing is a vital part of poker but beginners shouldn’t mess around with it too much unless you are feeling really confident.

Why we say this is because you are still picking up on the respective hand strength, which denotes that you may not know if you are making a bluff or not.

There are many other strategies that you can master before working on bluffing.

Understanding the elementary rules of the game is one thing but to actually be successful at it is another.

We wouldn’t want you to waste your time losing so we will give you some pointers that will definitely give you an advantage over other participants who are still learning the game.

We have touched on three different stages of strategy: beginner, intermediate and advanced but the guidelines provided are easy enough for beginning players to comprehend.

This is that one tip you’d want to pay close attention to: Play tight – don’t play too many hands!

A common mistake amongst amateur players is that they are not selective enough with their hands. Basically, if you are starting out you want to be playing good hands. The common trap of “any hand can win” is not true. Certain hands have a greater chance of winning whereas others may make you lose more money.

In essence, be selective in which hands you play.

Poker newbies often play The Call and we can comprehend why. Novel players are not always certain of the cards they hold and if their cards are good or bad.

Inexperienced poker players tend to call rather than bet and this I because they’re afraid of risking even more because they don’t fully understand how strong or weak a hand they may hold.

The point is that betting is much stronger than calling.

And this is because you are able to win a pot without showing your cards by betting. You cannot do the same thing by calling.

It isn’t that embarrassing if you lose a hand

Poker can make even the most seasoned players look ridiculous. This is just how the game works. At times, you will be caught with the worst hands. You will lose big pots. Sometimes, you could even misplay your hand. Beginners may often feel embarrassed or bad and these moments will happen often but just don’t let it get to you. Continue to play and work on your game. You will eventually get the hang of it.

There are hands that are more susceptible to winning but if you do not know the conditions of the hand you can’t for sure say which hand will win.

Let’s, for example, say that you have a pocket of fives. You have a flop of A-8-5. This flop is ideal because the strength of your hand is concealed. Challengers will have a really difficult time pinpointing your exact hand and they may very well have flopped a huge pair of aces.

You may argue the same for straights and full houses. On the flip side, some hands are tough to conceal. If you have one five in your hand and two on the board you’ve got trip fives, then many of the challengers will expect you next move to be a three – of – a – kind.

You can say the same about flushes which is really easy for a beginner to pick up on and at times, you may find somebody with a lower flush which is awesome!

Your position is the order in which players have to check or bet.

The order will always begin after the flop with the player on the left-hand side of the dealer.

Essentially, you’d want to play last because this gives you the advantage of seeing what everybody else is going to do.

Here are our greatest reasons to play in position:

When it comes to good hands – do not get attached

Further to that, if the board has loads of flush cards, you have to be guarded no matter what your pocket hand may be.

Be extra cautious when playing ace-queen. The Ace-queen looks great but tends to be a big loser in a rookie players hands. It is probably the chief trouble hand in poker with a pocket hand of jacks coming in close behind it.

But why is the ace-queen so bad you may be asking? It just seems to always happen that in really big pits the ace-queen is a huge loser. The ace-king dominates the ace – queen if an ace lads on the flop. It may also defer to two-pair type hands more easily.

A pocket of jacks may be a trouble hand but it has way more value if you happen to get a flop with no over-cards (kings, aces or queens).

Once you understand the basics you should focus your attention your challengers.

You may be astounded to know that “tell-tale” signs like nervously playing with your chips or scratching your nose are not where you can pick up on poker reads or other player tactics but instead from player patterns. If a player keeps on betting then the chance is pretty high that they are playing some really bad cards. In the same breath, if a player tends to fold frequently then you can assume that they are playing fairly strong hands.

Although this is a very simplified and basic reading its players, it is a crucial part of poker.

What’s the best way to become proficient in online poker ?

So, now that you understand hand rankings and the basic processes and game-play of poker. What’s your next move? Is by actually playing some hands.

The fastest way for you to get up to speed is playing a number of hands in a stress-free environment and this is where online poker comes in handy. In fact, online poker can even post your blinds for you.

What you want to do is play a bunch of hands and get familiar with how the game works. Practice makes perfect. So the more you play, the easier it will become and have peace of mind knowing that the app won’t make any mistakes so the pot will go to the correct person.

Once you’re at ease, you can start playing on the real money after and try winning some big bucks.

What you can do is download an awesome Poker App or pick one of our highly recommended online casinos that offer great banking options and amazing life-like software.